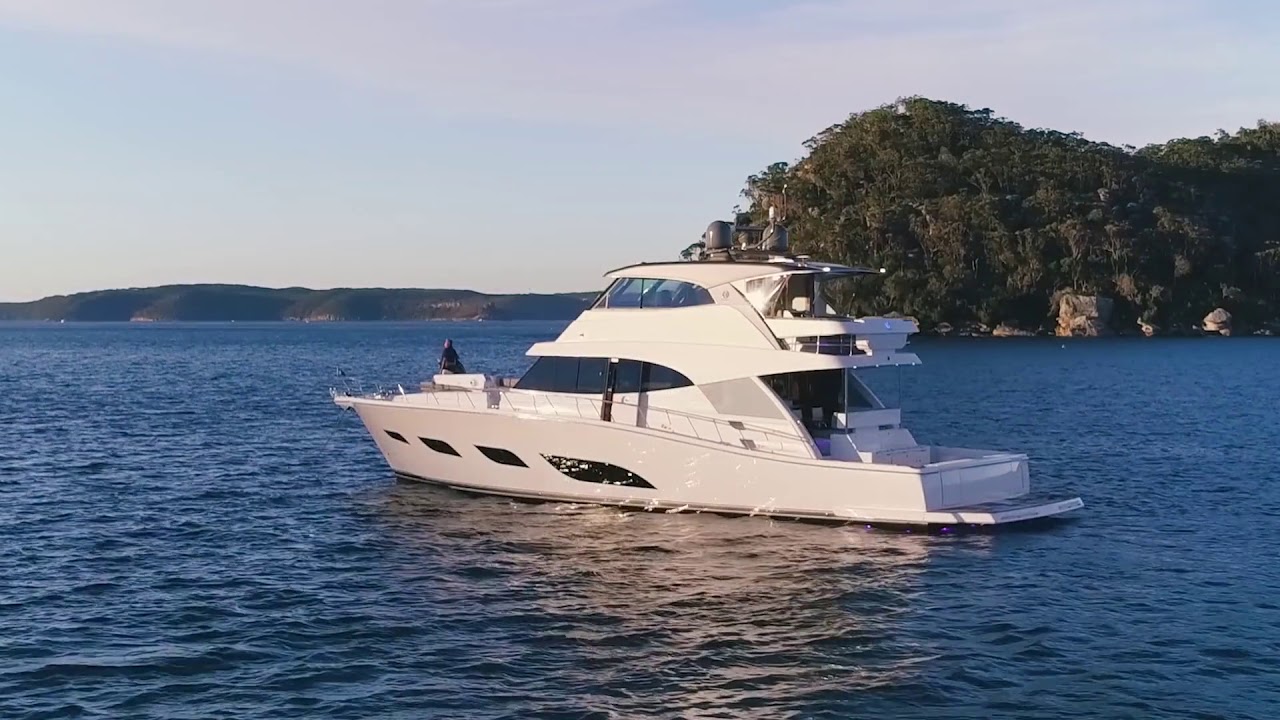 Described by many as the marque’s best work to date, the Riviera 68 and sister ship 72 are true long-range adventure boats, and each comes standard with the complement of Twin Disc equipment for the ultimate ease of handling.

The new generation Rivieras offer top-of-the-range luxury with features suited to extended time onboard, bordering on superyacht size, yet nimble enough for two people to manage.

Seakeeper stabilisers are optional and have been specced by owners looking for the “complete package” in stability and comfort in all sea states.

Making their debut in 2017 at the world’s premier yacht shows, the 68 and 72 have already exceeded the yard’s ambitions, with a strong order book and unanimous approval from marine media and the market.

Hull number one of the Riviera 68 was bought from R Marine Crawley by seasoned boat owner, Andrew McDonald. Called “Therapy”, this impeccable vessel is based in Mackay, North Queensland where has already enjoyed good use cruising the pristine coastline and islands of The Whitsundays.

Andrew and his partner Jenny had already experienced the full cruising capacity of the 68, bringing the boat back from display at the 2017 Sydney International Boat Show via a sojourn on the Hawkesbury River, then the Gold Coast for a few weeks, Fraser Island, Lady Musgrave Island and home to Mackay.

“Between us we have six kids and 10 grandkids. Over the holidays we were at Hamilton Island with 35 people onboard,” Andrew recounts. “Therapy is our largest boat to date. At 75-feet overall, once we got used to its physical size, it’s the easiest we’ve ever owned.

“Jenny has never been game to operate our boats, but with its joystick controls and GPS, she’s not phased at all. It’s so user-friendly. It holds its position superbly when we’re bringing it into the marina. We are really happy with the whole set up.” 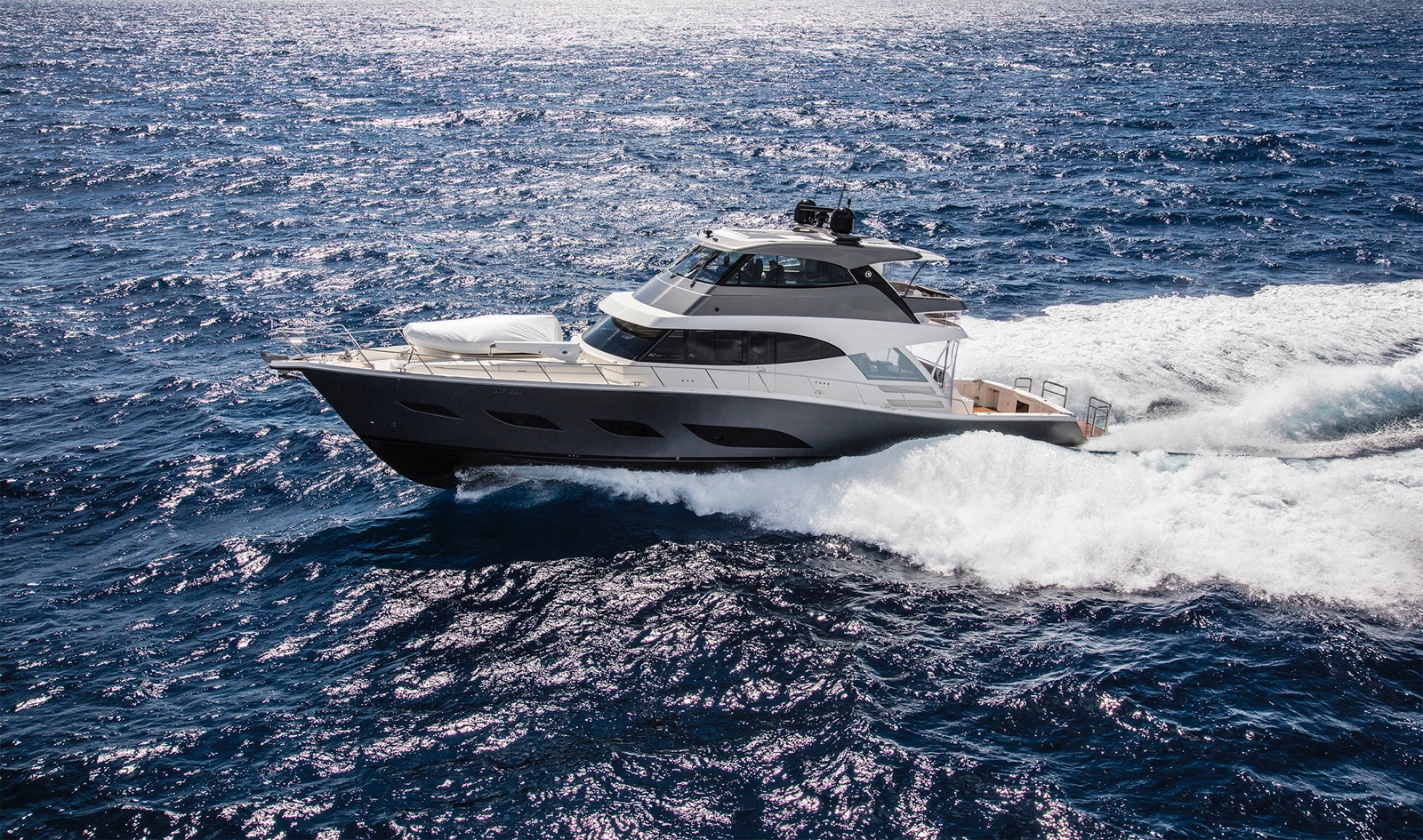 In Victoria, hull three of the Riviera 72, known as “Orrca” (pictured above), was fully optioned with Twin Disc gearboxes, EJS (joystick), EPS (station hold), SeaTorque shafts and the Seakeeper 16 gyro. Orrca’s proud owner, John Orr-Campbell says that among the myriad list of features they wanted, they had to be certain “the chardonnay wouldn’t spill wherever we pulled up”.

“So much effort has gone into the design, the boat is exceptionally comfortable, extremely livable,” says John. “I wanted the best I could get on this boat. My wife, Michele and I wanted to make sure that a boat that size was easy for the two of us to manage. The Twin Disc joystick and position hold, with the thrusters and shaft drive mean we are confident of bringing it in to marinas and anchorages in any conditions. The SeaTorque propulsion system is so quiet and smooth, compared to traditional shaft drive applications, and the Seakeeper gyro onboard makes a vast difference.

“We brought the boat in to the marina at The Spit (Sydney) and there was a bit of swell. With IPS, we would have been a mess. But with this system, there are no weaknesses. It took all the hard work out of it.”

“We experienced this at Main Beach, heading north in a 25 knot south-easterly. We have some great video of her running south a few minutes later doing over 35 knots into a two metre sea. With the Sea Keeper on she turned very flat even with this on her beam.”

At anchor, too, the Twin Disc and Seakeeper combination is unbeatable. “We were moored in Gloucester Passage, near Airlie Beach, and during the night the wave action against the hull sounded like a tsunami. It would have been enough to rock us out of bed! But the boat was still and stable and completely comfortable.”Dealer, Stuart Jackson at R Marine Jacksons says the set-up on Orrca is ideal for this size of boat.

“The EJS joystick system is coupled to the shaft drive engines and mated to the hydraulic bow and stern thruster to give a smooth seamless action for manoevring from the various helm stations. With craft this size, owners are looking for quality and ease of use. This system allows owners to handle their own boats in close quarters with confidence using the joystick function.

“The EPS station hold makes the boat anchor via satellite for you to cruise with low crew numbers to get ready for berthing, to fish, sort out any items you need to attend to against wind and current while also holding boat direction.”

One significant standout was how impressive the SeaTorque shafts were on the 72 and all other boats which have been fitted with them.

“We have all been very surprised because not many people really knew what this was before Riviera took the leap to install this as standard,” explains Stuart. “The results are the boat is smooth and quiet and very close to vibration free.

“The SeaTorque shafts are oil-filled tubes with a drive shaft within that creates unbelievable quietness and minimal vibration on board, compared to the traditional shaft methods, while also improving power loss. Our owners are accustomed to quality, and the SeaTorqure tubes are quality that ensure a smooth quiet ride.”

The Seakeeper stabilizer lessens the roll, making the boat more stable in all conditions. “This creates a more pleasant cruising experience,” says Stuart. “It also works really well at anchor reducing roll substantially. The feedback is that you will more often go boating, when previously you may not have.

“In addition, the advantages are we have a single supplier for all the above from a sourcing point of view and warranty point of view.”

John and Michele say their “gorgeous coastal cruiser” is destined for intense long-range cruising during winter, which will prove a cinch for this 80-footer.

“With the Twin Disc system and Seakeeper, we’re more inclined to be spontaneous and take the boat out more often,” he says. “And no fear of spilling the chardonnay!”

For a review of the Riv 68, including Twin Disc gear, visit https://www.boatsales.com.au/editorial/details/riviera-68-sports-motor-yacht-review-59507/