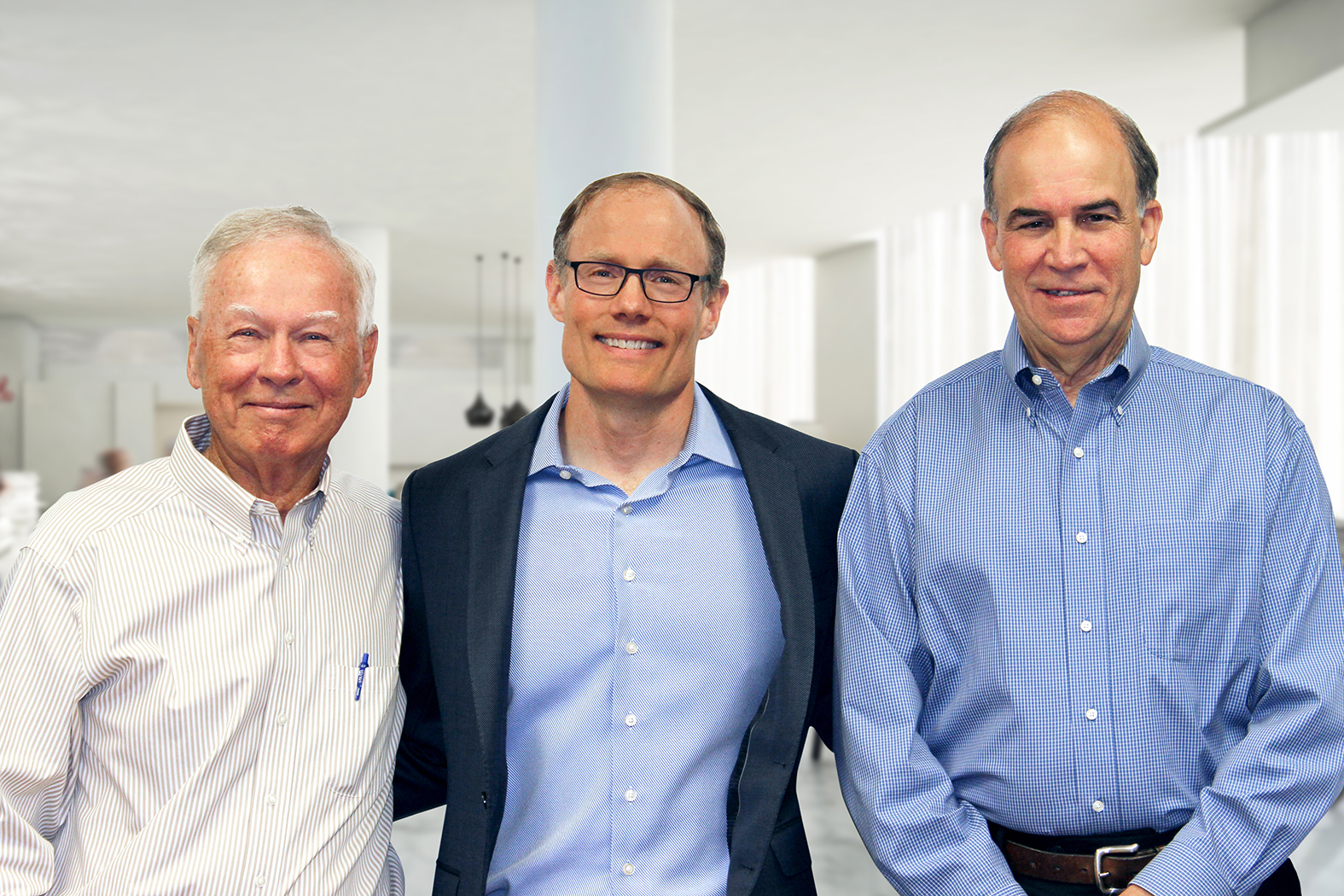 Celebrating 10 years since they shipped their first Seakeeper, the US-based company, founded by Shep McKenney (above left) and John Adams (above right, with Larry Gies, Madison Industries president and CEO) has a global presence. Today, Seakeeper is majority owned by Madison Industries and helmed by President and CEO, Andrew Semprevivo, with Bob Moser, Vice President of Manufacturing and Engineering, and Rebecca Smitha, Vice President of Finance. Shep McKenney and John Adams remain as minority owners on the Board of Directors and McKenney serves as Chairman.

Here, Shep McKenney sheds light on the motivation behind the development of the Seakeeper gyro, its phenomenal success in Australia and the brand’s plans for the future.

What is your professional background?
I was a lawyer for the first nine years of my professional life, and then started a company that built and operated the first chain of all suite hotels in the US. Toward the end of my time in that business, I owned a Hinckley sailboat, and learned that the Hinckley Company was in very bad financial condition after the death of the founder. I loved the Hinckley boats, and the people who built them with so much care and I loved the beautiful place that they were built on the coast of Maine. I didn’t want to see it die, so I bought it.

What was your path to boat building?
After owning Hinckley for 10 years (1992), I realised that a company that built only cruising sailboats didn’t have much of a future. Sailboats may be the slowest form of human transportation and require considerable skill and patience to operate, and the trend, then as now, was toward speed and user friendliness. So I decided to build a powerboat – but not just any powerboat, but rather one that accorded with the Hinckley tradition of beauty and innovation.

The result was very unusual for its time: the 36’ Hinckley Picnic Boat. It bucked the trend of packing the maximum accommodation into the minimum length and put beauty and performance first – designed from the outside in, rather than the other way around. It was built with resin infused carbon fiber and kevlar, and, most unusually, had a water jet drive, which permitted it to be operated in very shallow water. And while water jets allow wonderful control authority, harnessing that authority is fiendishly difficult – among other things, it has opposite sensing in reverse from conventional drives.

So, I decided that we would have to do a fly-by-wire joystick control system to create an intuitive connection between boater and boat. In the course of a year, several engineers and I developed that joystick system in Maryland where I live. The result was that Hinckley was transformed from a small sailboat company into a much larger jet boat company. In 2016 the one thousandth Hinckley joystick equipped jet boat was delivered. 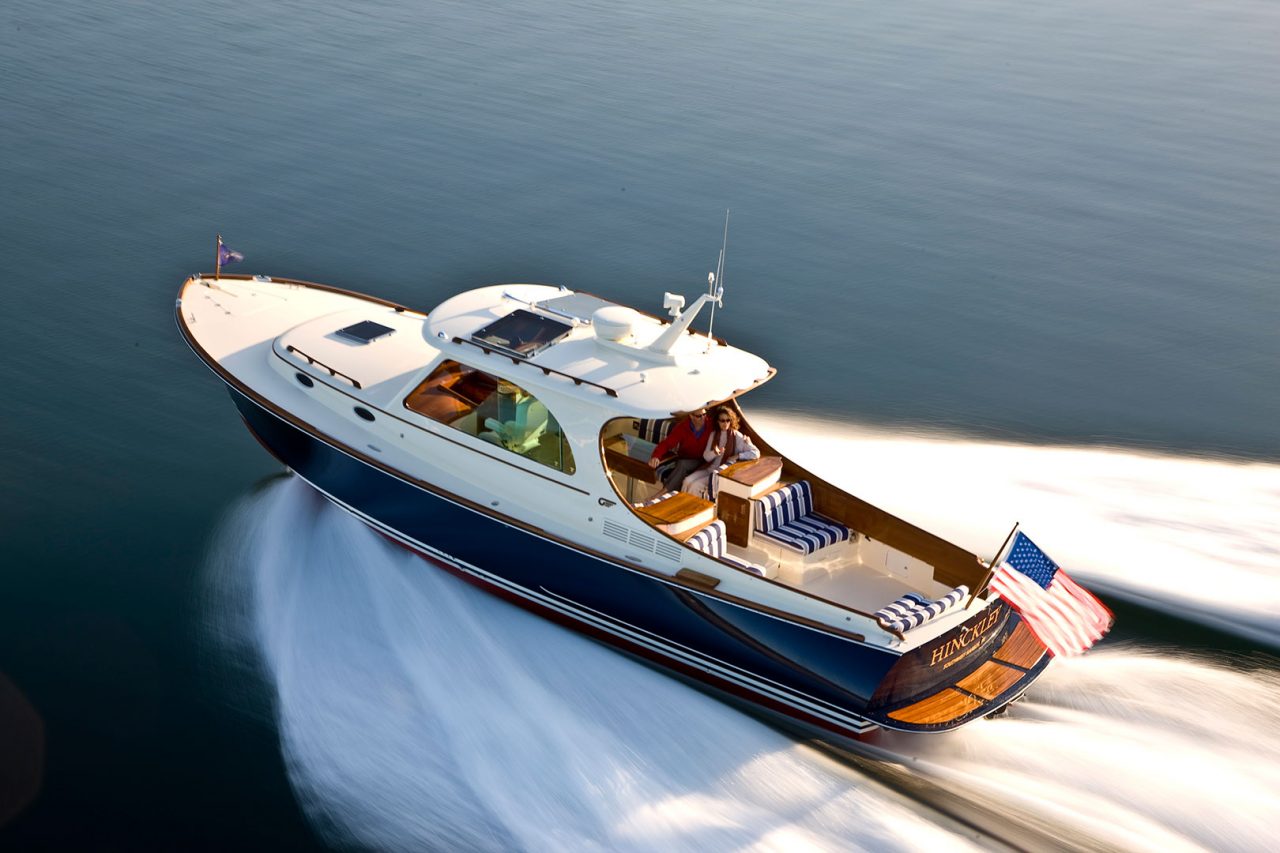 How did that then feed into the gyro concept?
In the course of developing the joystick I tried to connect with someone who had experience with active motion control in boats, and was referred to my present partner, John Adams, who was described to me as “the person who knows more about boat motion control than anyone in the world”. He was unable to help me then, but we become friends, and a few years later, acquainted me with gyros employed to limit boat roll. After looking at the existing state of the art we concluded that a much more effective device could be created, using technologies from unrelated industries, that would change the experience of being on boat forever. Those technologies are using a vacuum chamber to allow the gyro flywheel to spin much faster and using motion sensors linked with a computer to allow the gyro’s tilting to accurately counteract the wave energy. So important is the latter that we believe that our continuous software development has reached the point that it enhances the raw gyro performance by at least 25%.

In a nutshell, how does it work?
Inside a vacuum encapsulation, a flywheel spins at speeds of up to 9,700 rpm. When the boat rolls, the gyro tilts fore and aft (precesses), producing a powerful gyroscopic torque to port and starboard that counteracts the boat roll. 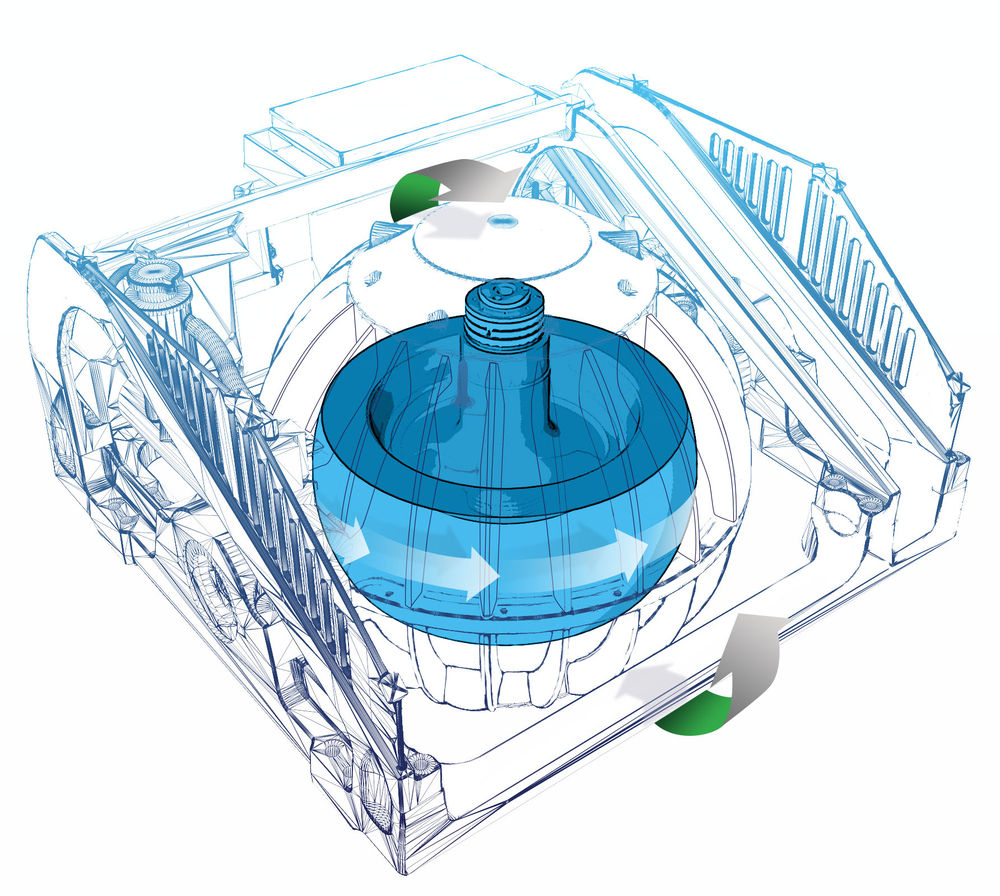 What range of vessels in size and weight does the Seakeeper cater to?
Boats 27 feet in length (or up to 7 tons) and above.

Which brands have made Seakeeper standard on their boats?

In what ways does a Seakeeper onboard improve the boating experience?
Seakeeper eliminates up to 95 percent of all boat roll, the side-to-side rocking motion that causes seasickness, fatigue and anxiety.

What are the attributes of Seakeeper that appeal to a contemporary boating public?

Seakeeper is changing a fundamental human experience by making boating more accessible and enjoyable for everyone, from the veteran boater to the first-timer. In the recreational market, Seakeeper can help reduce seasickness as boat roll is the primary factor in that stomach queasiness that makes boating inaccessible to many.

It also helps make the ride more comfortable and reduces fatigue after a day on the water. In the commercial market, it of course does those same things, but the safety factor comes into play more. Commercial and military vessels spend more time in the open ocean in rigorous conditions that the Seakeeper can help mitigate to make the vessel safer for all on board.

Is there feedback from boaties around the globe that makes you the most content and proud?
We now have more than 6,000 units in the field and hear wonderful things from owners all the time. To have boaters enjoy their time on the water more often is so satisfying, and the stories of folks who get seasick being able to do what they love – makes it all worth it.

How many countries is Seakeeper now present in?
Seakeeper has offices in both the US and Italy, but dealers in approximately 42 countries. We have more than 170 employees across the globe as well. 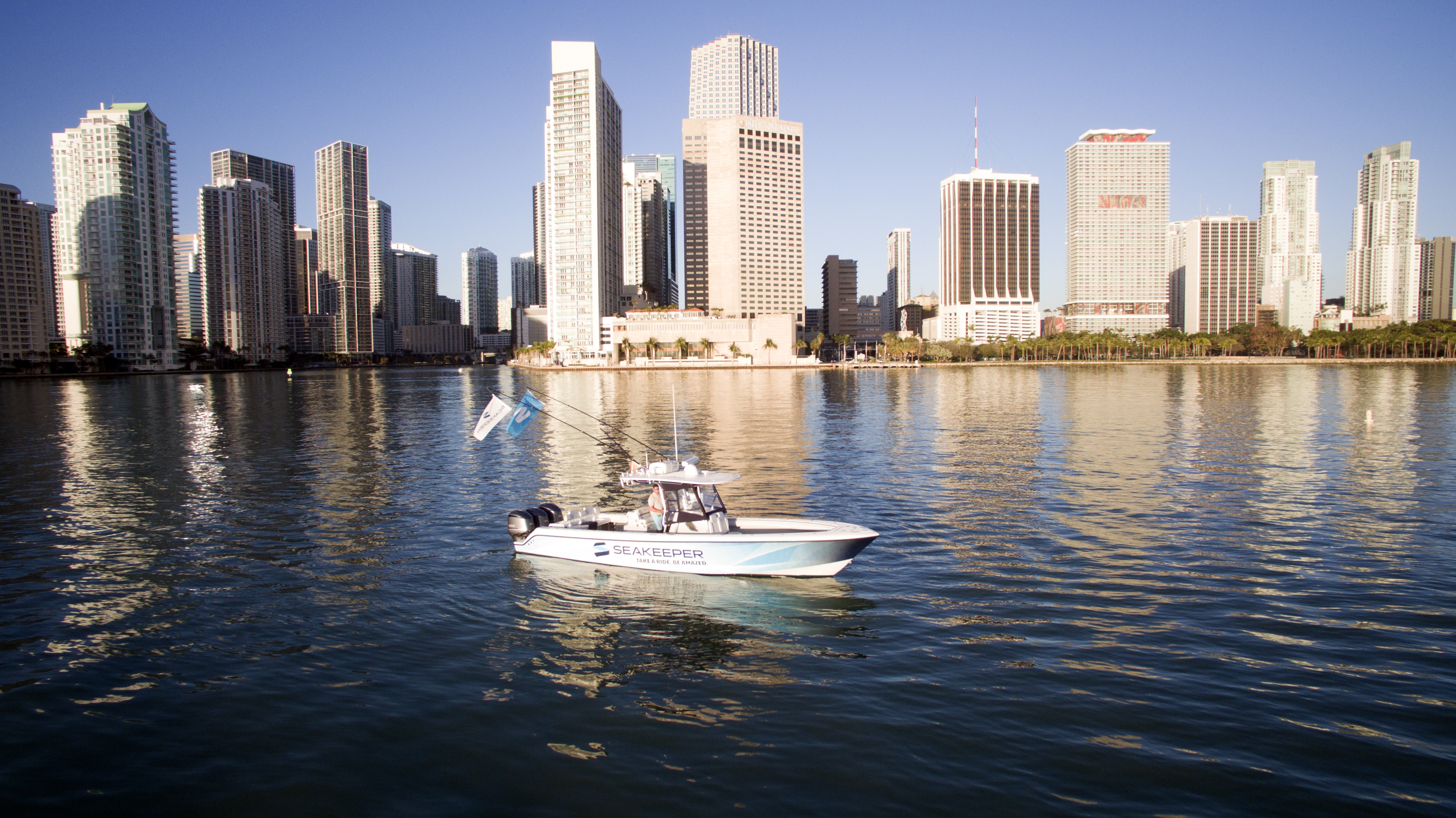 How does Australia fit into the international picture?
Australia is primarily a growth leisure market with most of the Australian business occurring on the Gold Coast. Twin Disc Pacific is actually our largest distributor worldwide. In Australia, Seakeeper has a strong presence in the pleasure craft market, and it’s developing strong ties in commercial sectors as well.

What’s next for the company/brand after the Seakeeper 2 – are there smaller units in the pipeline or enhancements to current product?
Our engineers are constantly working to refine our technology for smaller and smaller boats, and we plan to launch a new product each year. Our team is currently fine-tuning our next product release, including the model name and exactly what size of boat it will be ideal for. We hope to have a model for 20-foot boats by 2021.

What’s next for you?
John and I plan to stay deeply involved in Seakeeper going forward, mostly with product development. Even though we’ve brought Madison Industries on as the new majority owner, I’ll remain Chairman of the Board and John will sit on the Board as well. We’re very proud of Seakeeper’s past and even more excited to plan for its future. 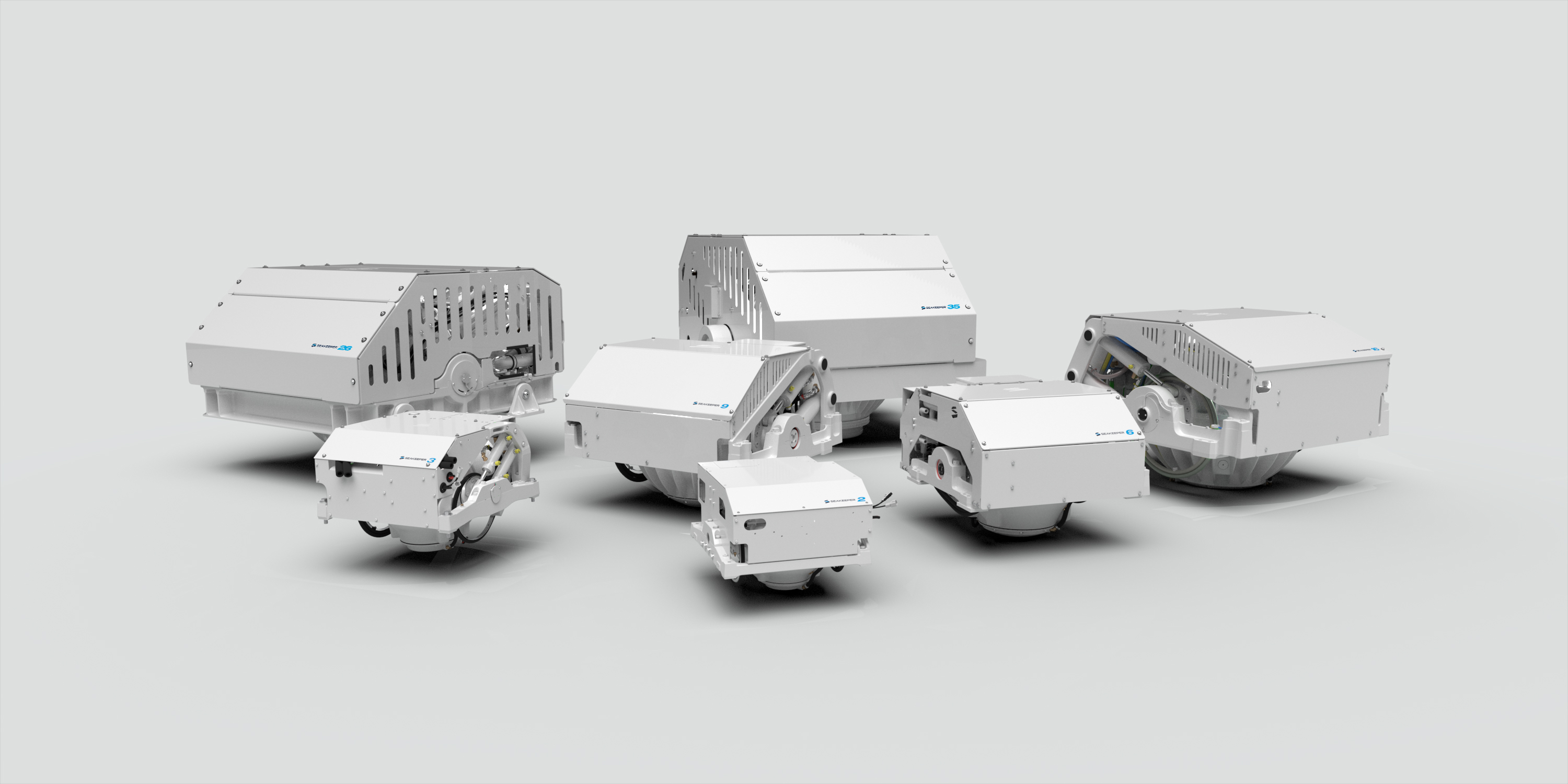